This course turned out to be far more than a pleasant surprise. I had been extremely lucky that my High School offered a dramatic literature on Shakespeare’s works that illuminated the correlation between the roles of the actor as well as the dialogue that exists within Shakespeare’s own intellectual discourse. I still hold a firm belief in the fact that Shakespeare is best taught through acting, through investing a sense of consciousness into the characters that he wrote in order to truly understand them, and that the actions are intrinsically linked to the texts themselves. However, Professor Peter Herman’s (SDSU) approach to Shakespeare’s plays as integral, historically rich, and socially revolutionary texts greatly expanded my own understanding of the roles they played beyond an approach that dealt with the texts themselves.

As an effort to focus the class around a particular problem, “the problem of genre,” we began with an understanding of the traditional and contemporary definitions of “genre” taken from period appropriate treatises on the subject. Through the course of the class, we used this framework to break down these constrictions and redefine them, as Shakespeare did, through a direct analysis of his works by genre. We read:

While I lament the omission of two of my favorites, Hamlet and Othello, the specific choices in texts serves a necessary purpose for the focus of the class. Pay close attention to the highlighted texts above, they each represent a significant breakaway from their established and expected genres. While Shakespeare tends to play with conventions throughout most of his work, these plays in particular highlight a transition between genres throughout his career as a playwright. The Winter’s Tale and The Tempest are unique in that they do not easily fit, if at all, into established (at the time) genres. 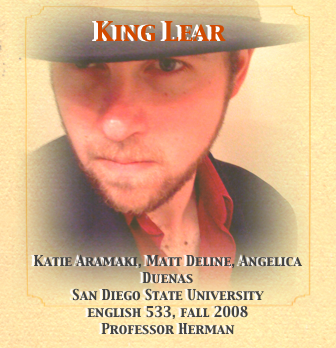 The papers included at the bottom of the page are investigations into specific problems along this line with Romeo and Juliet, and Measure for Measure. However, it is the short film of King Lear‘s “Act III, Scene II” (DVD cover pictured left) produced in conjunction with my brilliant colleagues Katie Aramaki and Angelica Duenas that I am most proud of. Before saying any more, I’ll let the videos speak for themselves.

Hope you enjoyed that! The intention was to bring a somewhat postmodern, industrial aesthetic to the production that mirrors not only the state of Lear’s realm in a semi-Orwellian manner, but also the rapid degradation of Lear’s psychological state-of-mind. It was also the first opportunity that I had given myself to act since leaving High School (which was 7 years prior) so it was an extremely satisfying project on all accounts. As I said before, acting is an integral part of experiencing Shakespeare, and having the opportunity to create this video really rounded out the entirety of the class for me.

The Wrath of Duke: The Problem of Justice and Religion in William Shakespeareʼs Measure for Measure